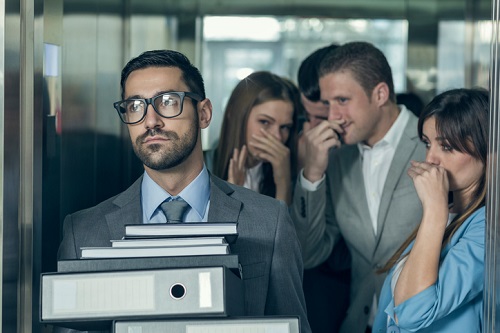 3 Comments on Should a recruiter tell a job candidate about his BODY ODOUR?Posted in JOBS, RECRUITMENT By Dan-Ekeh NdukaPosted on October 13, 2020October 13, 2020Tagged BODY ODOR, CANDIDATE, JOB INTERVIEW, RECRUITER

When you have an applicant with strong body odour and the person is qualified for the job role but the other staffs are scared of being in the same room with that person. Can we tell them or we should just ignore the smell and act like nothing is wrong?

The compassionate thing to do is to tell the person. Even though it may seem shocking, there are people who can make it to adulthood without a clear understanding that they stink. Or, if they know they stink they may not know how to handle it. There are people who manage to make it to adulthood without understanding which parts of your bodies needs thorough soaping/bathing regularly. Additionally, when in doubt, wash your clothes.

Anyway, so when you encounter someone whose body odour is holding him back, it may be extremely helpful if you explain that a bit of soap, some deodorant and laundry detergent could make his career take off.

However, I’ll be honest and say unless the person’s resume was clearly superior to the other candidates, or I was seriously lacking skilled candidates, or the job would actually share a cube with my worst enemy, I’d probably just do a “Thanks for applying, we’ll keep your resume on file for the next 12 months” email.

First of all, it is rare to see a person who makes it to adulthood without appropriate instructions in hygiene. It does happen, but it’s indicative of other problems. Problems I don’t wish to have to deal with in the office. Seriously, no high school friend pulled you aside to offer some Secret? Your mother didn’t send you to the shower? Your gym teacher didn’t sit by the showers with her check list to make sure you washed your armpits after the strenuous act of standing on the volleyball court and pretending to play volleyball? Something wrong is in this person’s past. Don’t know what it is, but something is wrong. And do you want that problem to become yours?

Second, if you bring it up and don’t hire the person for whatever reason, then they believe that their odour was the cause of lack of a job offer. And while it’s perfectly legal to refuse to hire someone who stinks, that protection only extends as far as the problem is caused by lack of soap and not a medical condition.

You don’t know whether it is hygiene issue or a medical one. (And yes, there are medical conditions that cause foul odors.) And so once you bring it up, if the problem is medical and by not hiring the person can argue that you’re discriminating against her, And even if it’s not a medical problem, she could argue that you’re discriminating against her because you regard her as having a disability. (Does stinking substantially limit major life activities? My answer is maybe.)

READ ALSO: CHECK OUT THE WAYS TO INCREASE YOUR VALUE AT WORK

It’s so much easier to just put the resume into the “thanks but no thanks” pile. In today’s economy that pile is generally large anyway. It’s really hard to win a failure to hire lawsuit when you didn’t even make it to the interview stage.

Now, two other thoughts. First, if you have an odour problem that is medically based, I recommend bringing this up as soon as the problem is obvious. (That is, you don’t put it on your CV, but when you are face to face with someone you bring it up.) Why? Because it removes the defense that they didn’t know about your problem, and therefore couldn’t be discriminating against you.

Second, if you already have an employee on board who has this problem, you deal with it straight on and address it as a hygiene issue until they tell you otherwise. It’s okay to hand out a sheet of paper with good daily hygiene tips.

3 thoughts on “Should a recruiter tell a job candidate about his BODY ODOUR?”