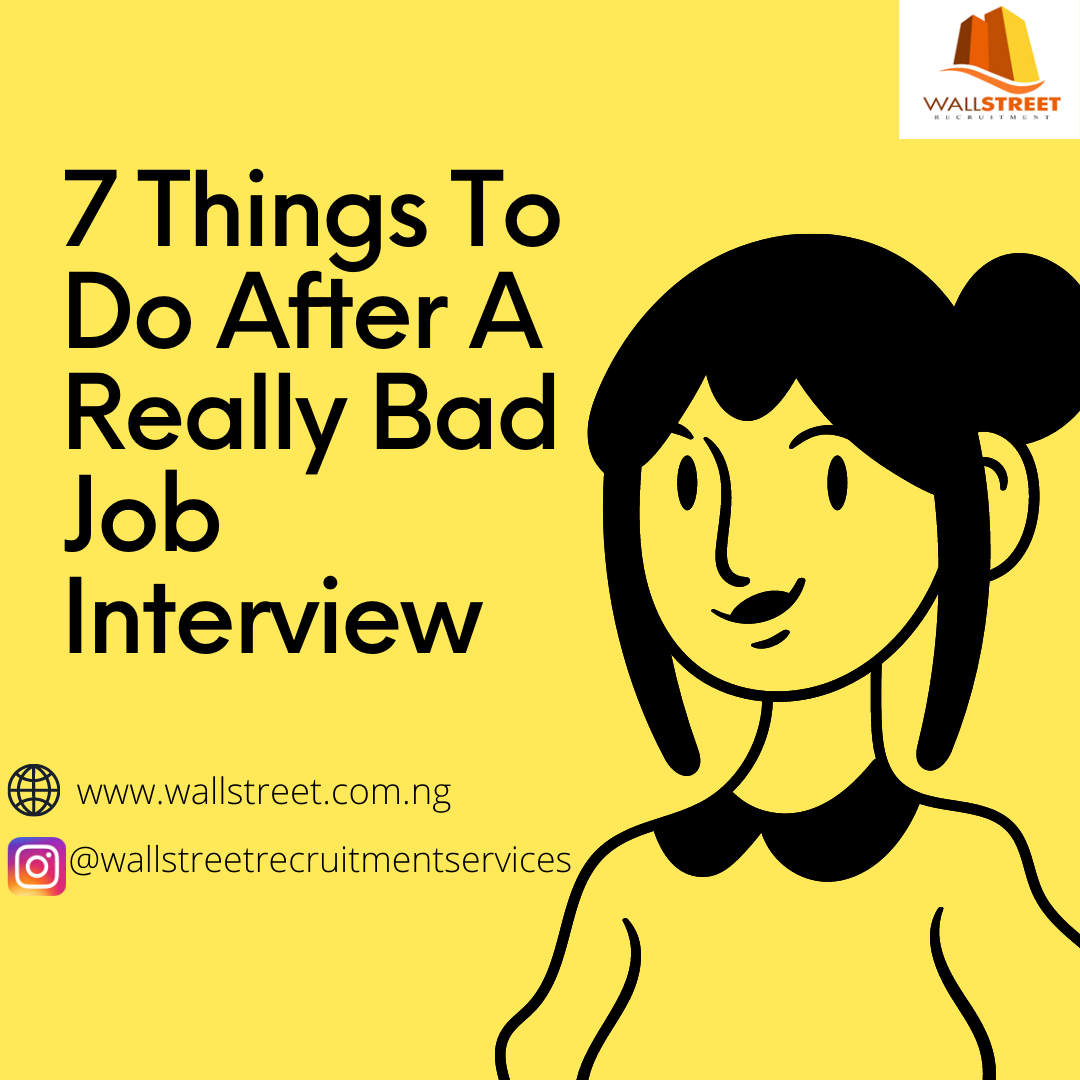 Have you ever left a job interview knowing you did not do well? Chances are you have and you probably handled the situation by beating yourself up and putting that opportunity behind you. But there is no benefit in walking away from the job or employer with a negative attitude.

Bad interviews can be very discouraging and can cause feelings of inadequacy, shame, sadness, and even depression, We all like to portray ourselves as successful and when we have an experience that contradicts that image, it can be difficult to recover. Particularly when the interview involves a lot of pressure, the person desperately needs the job, this just makes the bad job interview worse.

According to Sylvie Stewart, assistant director of career services at the University of Dayton, stated that, “People tend to spend time wishing they could rewind and do it over. It is very normal to feel negative after a bad interview. As an unemployed job seeker, you are naturally very emotionally raw and vulnerable.”

A ‘bad interview’ can mean a lot of things: The candidate believes that he or she flopped on most of the questions; he or she was not well prepared for the interview; the candidate is dressed inappropriately; says something offensive or arrives late; or a personal issue like a family death or a break-up distracts the candidate during the interview, among other things.

If your talents are extremely valuable to the organization and they really want you, the employer might overlook small mistakes. However, if they’re indecisive about you, or you aren’t in the strongest position with regards to the other candidates, the mistakes might not be fixable.  But that doesn’t mean you shouldn’t try.

If the candidate believes the interview went poorly, he or she could look for redemption, It’s always better to make an effort to redeem yourself than to leave the interviewer with a bad taste in their mouth.

READ ALSO: The Best Place To Get A Loan – Why you should apply for a loan with us at Wallstreet Financials #ApplyNow

You can’t rewind and redo the interview neither can you change the employer’s decision to offer you the job., But there are a few things you can do after a bad job interview to help you avoid such mistakes in the future, to correct the employers impression of you, and, if you’re really lucky, to help them understand and overlook your mistakes.

1. Reflect on the experience:

There are lots of people who believe they have messed up the interview, The first thing to do is ask yourself what went well.  It’s important to discover what went well first so that you’re able to look at the negative aspects with a less defeated attitude. then you need to ask yourself “what is the one thing you would change.” If you have a bad feeling about the way things went out, identify exactly what went wrong.

2. Learn from the mistake:

Note down the mistakes you made during the interview, learn from them, and do better next time.

The best thing to do with a bad interview is learn from it, Don’t wallow in self-pity or allow the bad interview to be an excuse for not following-up or not wanting to go for an interview anymore. Instead, ask yourself what you would do differently to prepare next time; figure out what information you should have had that you didn’t; and think about how you would handle a difficult question next time.

3. Learn to forgive yourself:

This will enable you to do better in a future interview.

Nothing good ever comes from beating yourself up. It’s natural to feel uneasy for a little while but don’t let the feeling to last and don’t let it discourage you from reaching out to the employer to make things better. Accept your mistakes and move forward.

4. Explain what went wrong in a follow-up thank you note:

Don’t make excuses, but do acknowledge your careless mistakes. “For example, if the candidate believes their responses to questions were off target, he or she can send a well crafted follow-up letter to the interviewer admitting a misunderstanding of the questions. This might make a difference. .

However, make sure you only draw attention to the mistakes you’re absolutely certain the employer caught, or you’ll bring light to an issue that the interviewer might have otherwise missed.

5. Use the ‘thank you note’ to add anything you might have forgotten to mention:

Maybe the candidate forgot to tell the employer an important part of their work experience or education that would be relevant, Or maybe they forgot to mention a connection they have in the organization. This sort of thing can be remedied with a quick thank you e-mail to the person who interviewed you. The thank you note is also a great place to remind the employer of your strong points or what went well during the interview.

6. Inform the employer of any outside distractions:

If your interview flopped because you were distracted by a serious life event, it is okay to call or e-mail the employer afterward to explain, They may take this into consideration when they assess the interview.

7. Never apologize for a bad interview, but do say sorry for specific slip-ups:

Remember, you don’t know what the employer is thinking, and maybe it wasn’t as bad as you think. If you did something that requires an apology, it’s a judgment call. “If you already apologized in person, for example…you accidentally spilled water on the interviewer, there’s no point in repeating that apology.” You don’t want to keep reminding the interviewer of what went wrong.

“You can use an excuse, like ‘my best friend’s name  is Kim or you can just say, ‘sorry, I’m usually much better with details than that.’”

These 7 steps are really beneficial and should be memorized by candidates who are planning to go for a job interview.