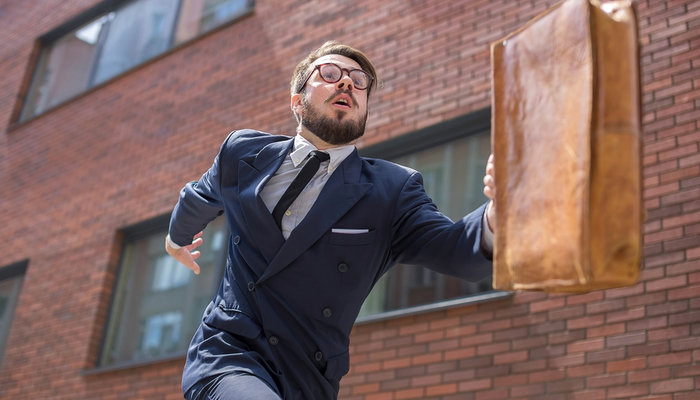 Damn! It’s 11:48 a.m. and you’re stuck in traffic on your way to the interview for the job of your dreams scheduled for 12p.m! You’ve only got 12 minutes to get there, and you know that there’s just no way you’ll be able to make it on time.

But before you drop your head against the steering wheel and start crying like a toddler who had their favorite toy taken away, there’s still hope for you!

Although running late for a job interview can leave a bad impression on potential employers, as well as raise a few red flags about your suitability and professionalism, there are a few things you can do to remedy the situation and, hopefully, avoid missing out on the opportunity of a lifetime.

Here’s a handful of tips on how to recover from arriving late for an interview.

1. Call Ahead:
As soon as you know you’re going to be late, give the interviewer a call to let them know. And the sooner you exercise whatever damage control is possible, the better. If you don’t have the interviewer’s direct phone number or even name (which, ideally, you should have asked for when you arranged the meeting), make sure you call ahead and let someone in the company know. They should (hopefully) pass your message on to the right person. A simple ‘Hi, my name is Richard Paul and I have an interview for the Digital Marketer position at 12 pm. I’m running a little late, I’m afraid’ will typically do the trick. Of course, there are some situations where calling in advance is simply not possible – for example, you’ve been involved in a car accident. You’ll naturally be too preoccupied with the matter at hand to even think about calling the company, and it’s completely understandable. That said, though, do make it a point to make that phone call at the earliest opportunity.

READ ALSO: #Investment: Why you should invest your money with us

2. Apologise:
If you’ve ever had to wait two hours for a friend to finally make an appearance to the dinner party which you spent a whole week planning (with an equal amount of forenotice), it’s safe to say that your frustration levels hit the roof. More so when they even didn’t apologise (let alone notify you) for their lateness (It’s truly a miracle they’re still alive and you’re not behind bars at this point.) Now imagine doing that to a potential employer who set aside 30 minutes or so out of their busy schedule to meet you about the prospect of bringing you on board and joining their team. Even if you’re running just 10 minutes late, the least you can do is acknowledge this and offer a sincere apology for potentially disrupting the rest of their day.

3. Have a Good Reason:
Chances are the hiring manager won’t ask you about why you’re running late, but you should offer a reason, anyway – and it better be a good one! That means a half-assed ‘sorry, I overslept’ or ‘I’m stuck in traffic’ just won’t cut it. Neither will the extended disco remix of ‘Today Just Isn’t My Day’ – even if your dog pooped on your interview outfit, your washing machine flooded the entire kitchen floor and you walked all the way to the bus stop only to realize you were still wearing your bathroom slippers, so you had to run back home to change into more appropriate footwear and, ultimately, missed your bus.

Interviewers are not the unforgiving monsters we make them out to be and they understand that sometimes life simply gets in the way. That is, of course, if your reason for being late is due to something that could not be avoided, like a broken down bus, for example, or a family emergency.

The key here is to offer information – not excuses (especially absurd ones).

4. Give an ETA (Estimated Time of Arrival):
Calling ahead or even sending a quick email to let the hiring manager know you’re going to be late is a little futile if you don’t give them a new estimated time of arrival. ‘I’ll be there as soon as possible’, for example, could mean that you’re either 10 minutes away, or on a train somewhere halfway across the country. You don’t have to give them an exact time (although that would, of course, be great), but it is absolutely necessary that you give the recruiter a rough estimate of when they can expect you. After all, making them sit around wondering when you’re going to show up can be a huge deal breaker. And we obviously don’t want that. When giving your new ETA, it’s a good idea to first make a quick assessment and figure out how much time you need to get to your destination. Then add on five or so minutes to give yourself a little leeway – but don’t admit to adding on extra time to your estimate!

5. Be Ready to Reschedule:
Like I mentioned earlier, the hiring manager has set aside time to meet you to discuss your suitability for the role – and their time should be treated as valuable as the Queen’s Jewels. That is to say: priceless. So, when you call ahead to let them know you’ll be arriving a little later than expected, you should be prepared for them to cancel or reschedule the interview. After all, they most likely have more important things to do than sit around and wait for you to show up – like close a multimillion-dollar deal with a client, for example. Or, worse, they may choose to see the other (albeit overly eager) candidate who showed up ridiculously early instead. And although they showed up extremely early, at least they showed up – which is why you should always, always aim to arrive on time for your interview.

6. Don’t Just Show Up:
Even if it’s only a slight possibility you’re going to arrive later than what was originally agreed, it’s best to keep the interviewer in the loop. That ‘slight possibility’ could turn into a definite certainty, after all, and keeping your potential employer waiting (without the courtesy of a little heads up) can spell disaster for your job prospects. Worst of all is if you show up to the interview as if all is good and well, even when you’re 30 minutes late. When you don’t show up at the time you agreed to, you inconvenience the hiring manager who moved their schedule around for your interview. And they probably won’t be able to – or willing to – move it around again, especially if they’re seeing other candidates and fitting you in will only disrupt their entire schedule.

7. Take a Minute to Compose Yourself:
When you do finally make it to the interview (having called ahead and following all the other tips I gave you so far), it’s important that you take a minute to compose yourself before you head to the reception desk. I know what you’re thinking: ‘I’m already 20 minutes late. I can’t waste another second!’ Patience, By taking a few moments to do whatever it is that you need to do to compose yourself (be it posing like a superhero for a minute or taking a few deep breaths), you’ll be better able to salvage the situation. On the other hand, showing up to the interview in an agitated state and completely out of breath will only lose you even more brownie points – and let’s face it: you don’t have that many left to lose! So, take a deep breath and repeat after me: ‘I am strong, confident man/woman who thrives on new challenges and works hard to achieve my goals’.

8. Apologize Again:
Once you meet the interviewer in person and extend your hand to shake theirs, say sorry once again for keeping them waiting – but go easy on the apologies. Say something like ‘I’m so terribly sorry for being late; it’s completely unlike me’ and move on.

The trick is to move past the hiccup as soon as possible – not dwell on it. After all, the more you apologize, the less sincere you sound.

Understand that this second chance is a rare opportunity, so don’t waste it by drawing attention to your tardiness (lateness) more than what is needed. And don’t lose focus on why you’re there: to demonstrate your awesomeness and, hopefully, bag your dream job!

Don’t let your lateness knock you off your game! So, make good use of all the tips you learned about how to conduct your body language and answer difficult questions, and you should be able to make a full recovery from your bad start.

9. Send a ‘Thank You’ Letter:
You should already be planning to send a ‘thank you’ letter after your interview, regardless of what time you showed up for it. But you should use it as an opportunity to apologize for your lateness one last time, as well as to express your gratitude for taking the time to meet you even though you were late. Stick to just a few lines or so, though. The less, the better, as they say.

Dear Hiring Manager, Thank you so much for taking the time to meet me today. I just wanted to apologize one more time for being late – it is not how I ordinarily conduct myself.

I know this must have been an inconvenience to you and I appreciate how you still took the time to meet me.

Once again, it was an absolute pleasure and I’m really excited about what I learned about the role and the company today.

Of course, the most important piece of advice I can give you is to avoid arriving late in the first place.

That said, life sometimes gets in the way and arriving late is simply unavoidable. However, by following the tips outlined above, you should be able to (hopefully) recover from a bad start.

Have you ever run late for an interview? Did the hiring manager reschedule or were they willing to wait for you? Were you able to recover or restore the situation?

Join the conversation down below and share your story with us!